Fans not spinning on GPU

All Graphics cards are equipped with an air cooling system, in which the cooler can spin at different speeds. Which depends on the overheating of the video card. The spinning of GPU fans makes noise, and when the video card fans not spinning, it becomes noticeable. And if not noticeable at first, it will become noticeable when the computer shuts down due to overheating. In this article, we will try to answer your question: why are my GPU fans not spinning? we will try to figure out the possible reasons why the cooler on the video card does not work and consider how you can fix the problem Graphics card fans stop spinning.

Many graphics cards have a built-in feature that only uses passive cooling hardware. when the PC is not in use or performing non-GPU-related tasks such as web browsing or basic applications. If this is the case, then it is reasonable to turn off the fan, and it will not harm or affect the performance of the video card.

The main point of the idea is to muffle the noise, including cooling only when necessary to keep the GPU within the acceptable temperature range. Even though there is no sound of the blades spinning when starting a new build for the first time, the behavior is not a cause for concern.

The fan only starts running under load when the temperature limit rises. If you run a complex game or a testing tool, the fan will start immediately. If it does not turn on, it indicates a serious problem. To check and make sure your non-working fans are working, start the game when the video card is under heavy load, the fans will start spinning. Load your demanding game to speed up the process.

What are the causes of a GPU fans not spinning no display:

There are a few reasons that cause pc fans not spinning:

we have discussed some of the most common reasons why your gpu fans not spinning no display, as well as some solutions that you can try. If all of these solutions do not work, then you should replace the video card. The overall point is that, if your fan is not spinning, you should start checking for problems immediately to avoid damage to other components in your PC.

How to fix GPU fan not spinning?

if your graphics card fans not spinning you can try these Fixes.

The simplest solution is often considered the best. Solution by IT pros around the world, try restarting your computer if your graphics card fan is not spinning. A reboot works wonders to update the system and change settings to ensure proper functionality, including GPU fans.
It is also worth trying a full system restart at this stage. Restarting is a fix for many common problems, and you’ll be surprised by how often it works.

Each video card requires a fan of a certain power. If you have a new graphics card, you need to check if its connectors are connected to the power supply (there may be a combination of 8 and 6-pin). A possible reason could be poor contact with the card or its complete absence. Check if the graphics card is properly seated on the motherboard in the PCI-E slot.

See if the power supply has the required wattage to power the graphics card. The constant shutdown of the PC and lack of response from peripheral devices indicate a lack of power supply. It’s recommended not to buy GPU without checking the power requirements.

If the current power supply decreases the power of the video card, it is necessary to replace it with a more powerful one. this will ensure that the fan turns on and operates normally.

With the computer open, make an important check to see if other connections to the motherboard are loose. Although the connections do not communicate directly with the graphics card fans. They do affect overall system performance.

As with any mechanical element, fan bearings can lose some of their ability to rotate over time. The best way to fix this is to freshen up the motor with a drop or two of standard lubricant.

To lubricate the bearings, you need to remove the plastic fans, and for this, you need a very small screwdriver that can be inserted between the blades. Double-check (using the internet) how to remove fans from your specific graphics card. There are usually 6-8 screws around the center of the fan that holds it in place.

After the blades are removed, apply a small amount of oil to the center bearings, just save oil as you can always add, but excess can do more damage. Stay away from WD40 or household cooking oils as they either leave marks that can interfere with function or evaporate too quickly to be useful.

The most common reason graphics card fans don’t spin is due to the accumulation of dust and debris on the blades. The fans used in GPUs have very low torque. Dust obstructs the path or brings the blades to full immobilization.

Due to their function of removing hot air from the video card. The fans constantly interact with dust that enters the computer. Over time, this debris stops at the blades. The problem is especially common if the PC has not been used or cleaned for some time.

Have a can of compressed air, open your PC, find your GPU, and then remove any remaining dust from the blades. You can even go further by detaching the fan from the graphics card and blowing the dust off both sides of the blades with compressed air.

If you decide to remove the fans from the graphics card, clean the heatsink (if the video card has one) from dust and spray it on the board again. Be careful not to touch the components of the system parts so as not to damage them.

Please update your drivers with the latest from AMD or Nvidia, depending on your graphics card model. Reinstall the drivers – to do this, delete the old ones, and install the new ones.

Perform a similar procedure with AMD GPU and Nvidia software. This applies to RadeonSoftware and GeForceExperience. Some of the settings are interconnected with the fan control element. Which is defining the start of rotation under certain circumstances. Similar problems appear after installing the latest versions, because of improper installation. There are cases due to the fault of the manufacturer supplying updates in the patch.

Time for a new GPU

If none of the above fixes worked, you are most likely having a mechanical glitch. Fan failures do happen, especially on older models that have been running for thousands of hours of use. A great way to test this is to download MSI Afterburner, a GPU overclocking and monitoring application. Then tune the program for a fan or maximum speed. If they do not start and you have covered all the points, the problem is a hardware failure.

In this case, besides having the necessary skill to open the fan and repair it manually, the only option is to choose a new fan. Fortunately, these devices are among the cheapest computer components and can be purchased for $ 40-50. Stick to reputable brands like Cooler Master and Corsair to ensure product reliability.

Defective fans aren’t the only reason the blades don’t spin. A malfunctioning motherboard can also cause the problem, specifically a faulty PCI-E slot. In this case, you can check if the problem is due to the PCI-E slot in use, or the motherboard in general. You can do this by plugging the video card into a different PCI Express slot and seeing if that solves the problem.

If it is not, and you followed the steps outlined earlier, then the problem may be with the motherboard. In this case, it may be time to pick up a new GPU fan or, if it is new, send it back to the vendor for a replacement. Most modern motherboards come with warranties, so this shouldn’t be a problem.

if your GPU fan is not spinning, the most likely reason is that it is clogged with dust. You can try cleaning it with compressed air, updating your drivers and software, or replacing the fan itself. If none of these solutions work, then the problem may be with the motherboard. In this case, you may need to pick up a new GPU fan or, if it is new, send it back to the vendor for a replacement. Most modern motherboards come with warranties, so this shouldn’t be a problem. Good luck!

THANK YOU FOR READING. PLEASE COMMENT AND LIKE THIS ARTICLE IF YOU ENJOYED IT. I WILL BE VERY HAPPY TO HEAR FROM YOU! 🙂 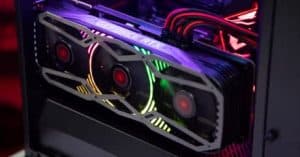